Jurors are charged with the responsibility of deciding whether, on the facts of the case, a person is guilty or not guilty of the offence for which he or she has been charged.

This is why the jurors need to have all of the facts.

.Trial Counsel Failed to Impeach Jenna X Through Cross—Examination of Deputy. Fredy_ Maestre and by. Introducing the Jenna X’ s 911 Call Into Evidence . 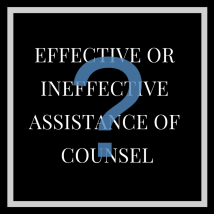 Mr. Ajoloko’ s primary defense at trial was that he was not the individual who attempted to rob Jenna X. Despite that fact, trial counsel failed to use evidence which reflected Ms. X’ s inability to identify the perpetrator. Failure to impeach a victim about her ability to identify the defendant as the perpetrator may constitute ineffective assistance of counsel. See e.g. Rutledge v. State, 786 So.2d 1199 (Fla. 4th DCA 2001) .

Deputy M. was the officer who originally responded to the scene and made initial contact with Jenna X. Deputy M’ s original report indicates that Ms. X advised him that she would probably not be able to identify the perpetrator. Mr. Aj oloko’ s trial counsel should confirmed that fact on cross— examination of Deputy M. Instead, trial counsel chose not to ask Deputy M a single question on cross—examination.

Additionally, trial counsel should have introduced Ms. X’s 911 call into evidence. That call would have provided further confirmation of Ms. X’s inability to identify the perpetrator .

Trial counsel’ s failure to question Deputy M about Ms. X’s stated inability to identify the perpetrator and failure to introduce the 911 call constituted deficient performance which was prej udicial to Mr. Ajoloko. Evidence that Ms. X did not believe she could identify the perpetrator right after the incident in question would have supported Mr. Ajoloko’s defense that she subsequently misidentified him. Accordingly, this Court should either vacate Mr. Ajoloko’ s convictions or grant him an evidentiary hearing .

In reaching its verdict in a criminal trial the jury must be satisfied that the person is guilty beyond reasonable doubt. Beyond reasonable doubt means that if there are two reasons given in the case and both are possible explanations for what happened, taken together with the evidence presented, the jury should give the person the benefit of the doubt and decide on a verdict of not guilty.

Playing the 911 tape and cross eamining the detective would have made all of the difference in the world.