Yesterday, March 17th was the oral argument. Originally, I had entertained the idea of watching it live from my home in Alabama. My son’s attorney told me that we could watch it live. I had been weighing the idea back and forth.

I decided to present my questions and concerns to the Wrongly Convicted Group. I especially want to thank George Barwood and Don Rehkopf. I am so glad that I joined the group. Their advice kept me from a lot of heartache.

It is a good thing that I attended because the argument was not held at the normal venue. Instead of being held in the courtroom, where it is video-taped; it was held at the UCF Student Union, where it is not videotaped. This was a chance for law students at UCF to ask questions at the end of each segment.

Imagine that. If had I not attended and tried to watch it live online, I would have been in for a rude awakening. I am sure that our attorney did not realize that we would be unable to watch it live.

Well, our appellate was unable to let the panel know of our presence. He said that he did not have time. Also, he did not bring up the questions that the jurors asked which were indicative that the jurors were having problems with the state’s witnesses and evidence. I know that there isa limited time factor but I thought the questions were important.

However, he did a good job arguing some of the issues. However, when the panel asked him questions, I was a little concerned. One of the questions asked was about the gun. The attorney did not make it known that the gun identified was from the cell phone of the guys that robbed my son. Also, he did not mention that the police was never in possession of the gun. This would have gone well with the fact that one of the juror’s questions was if all guns of the same color and make look alike. The jurors  had a copy with no discernible identification visible.

When it came time for questions and answers, I raised my hand. Or appellate attorney quickly intervened and said that I could not ask any questions. I was really disappointed. Later,  I asked him why I could ask a question  He said because he didn’t know what question I was going to ask. The good thing about attempting to ask a question made our presence known.

Well, amazingly, a law student asked an amazing question of the state. She first told the state that she noticed that the state did not rebut anything said by the defense. She then asked something like, how do you handle it when the appellate got it right? This question surprised everyone.

The state responded that although she is representing the state, she is also obligated to follow the law. I do not remember the exact answer but it was something of that nature.

I wanted to run over, pick the law student up and twirl her around.

Well,that’s what happened at the oral argument. We are praying for favorable results 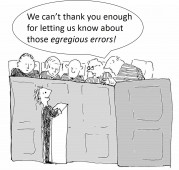 3 thoughts on “The Oral Argument – Change of venue”